No, They Aren’t Actually Offended 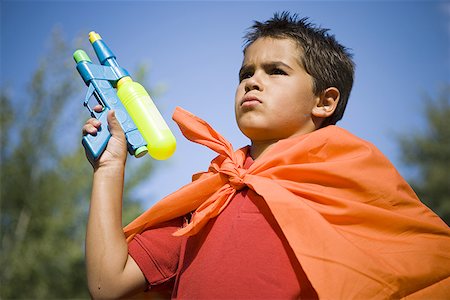 Recently we got to witness international public outrage over a picture of Britain’s Prince George playing with a squirt gun.  I had to read the story a few times to figure out what the actual issue was, but finally saw that people were “offended” by pictures of the young prince playing with a toy squirt gun.  Tweets, comments, and articles all about being offended by normal behavior.

I grew up in north Florida in the 80s where they were still shaking off a racist history.  When I was around age 9, my mom set up a playdate with her coworker’s son who was around age 7.  He was black and it was unusual to see interracial friendships at the time, but all I cared about was our mutual admiration for He-Man and his various warrior friends.  While playing outside one of his neighbors called him the “N” word.  Both a father and son said it right to his face, somewhat casually, but clearly intending to insult.

After the resulting dust-up of the name calling, I remember asking my new friend questions about being called such a heinously horrible name.  In my household, there was no greater offense than racism, so it baffled me that someone could even say that word, let alone an adult using it to refer to a child.  I can’t remember my friend’s exact words, but he told me that it hurt his feelings, it made him feel like nobody liked him, it made him feel like less of a person, and he felt like he didn’t matter.  He had a psychological and physiological reaction that was somewhat damaging to his self-esteem and his perception of his self-worth.

What he was describing was being “offended.”

Today the anti-gun groups play the “offended” card as often as they can.  Not because they are offended, but because they want to tie the emotions of being offended to their message to hide their lack of logic and reason.  It is an attempt to villainize people who disagree with them and change the opinion of activities that people recognize as normal, into activities that are considered shameful.

Because the anti-gun crowd is unable to produce facts, statistics, or any kind of logical historic or philosophical argument to advance their cause, they rely on pure emotion.  The idea is to shame society into changing normal behavior like a child playing with a squirt gun.  Groups like Brady Org and Moms Demand Action attempt conflate gun ownership and evil crimes to blame criminal activity on children playing with squirt guns.

They aren’t really offended.  They are frustrated that people refuse to agree with their false allegations and nonsensical arguments. I’ve been asked about San Diego County Gun Owner’s “agenda,” but the reality is we were founded to stand in the way of the agenda of groups who weaponize words like “offended” to emotionally bully people into compliance.  As long as they continue, we will continue to stand up to them and be the voice for those who value the ability to defend human life and our natural rights to keep and bear arms.

Next PostIs Your Local Gun Shop Helping or Hurting the Cause?