Progress in the Fight to End Gun Free Zones 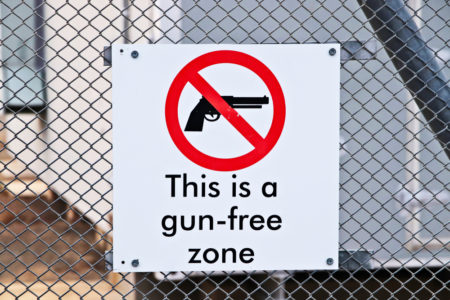 Clear thinking Americans understand that the vast majority of gun control laws in place are completely ineffective regarding their stated purpose. That stated purpose is always to increase public safety and reduce crime. Many of these laws actually endanger the public. Most are unconstitutional in that they clearly “infringe” on our rights.

Among the most dangerous of these laws are those creating “gun free zones”. Gun free zones are directly responsible for the death of dozens if not hundreds of innocent Americans each year. Almost all public mass murders occur in gun free zones.

One state legislature has finally taken action but only after one more citizen paid a horrific price. Nikki Goeser watched as a stalker shot and killed her husband right in front of her in a crowded restaurant. Goeser is a concealed carrier and might have been able to stop the murderer had she not left her gun outside in her car to comply with Tennessee state law. See Goeser discuss the event here and here. She has also written a book about her experience.

Well over 90% of mass murders occur in gun free zones. Mass murderers target gun free zones for access to helpless victims. This is often confirmed by evidence gathered after an incident or by information provided by shooters taken into custody. The 911 call isn’t even made until the first person is shot and often the incident is over before law enforcement officers arrive.

It’s commendable that Tennessee has amended their laws to make citizens safer. It’s a step in the right direction but it doesn’t go nearly far enough. The new law requires public areas where guns are banned to provide metal detectors and security to protect the public. Businesses that post signage banning guns are required to take the same security measures. The law also returns to local government the power to decide whether or not to prohibit guns in public buildings.

All citizens need to stand up and make their position known to their political leaders. The only way to end gun free zones is for people to stop electing the politicians that support gun free zones. Get educated, get involved, be engaged.

Previous PostReconsidering SCOTUS in the Fight for the Second Amendment
Next PostGuest Post: Should You Consider Concealed Carry?