Guest Post: An Update on Concealed Carry – San Diego County and Across America 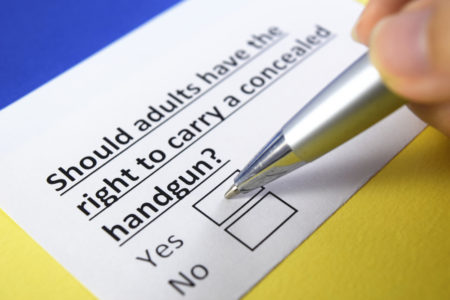 Part of what the 2A provides is the right of self-protection for an individual citizen and his or her family. One way that right is realized is through the ability to be legally armed outside the home.

Historically it has been impossible for the average citizen in San Diego County to obtain a concealed carry (CCW) permit. Citizens were denied the ability to protect themselves. Two years ago, that changed. San Diego County Gun Owners (SDCGO) led a successful effort, supported by many others, to convince the San Diego County Sheriff to issue CCW permits to qualified, law-abiding citizens.

Today, almost two years later, over 3000 citizens in San Diego County have CCW permits. About 120 new permits are issued each month. Those numbers will continue to grow as more people learn that CCW permits are now available. SDCGO offers CCW workshops somewhere in the county almost every week explaining the process. The workshops are hosted by various gun ranges and shops around the county.

So, what is the concealed carry situation across America? The following is from the paper on Concealed Carry Permit Holders in the United States 2019 by Dr. John Lott of the Crime Prevention Research Center:

Lott’s paper is fairly long but it’s an easy read and the information is fascinating and very encouraging. I highly recommend you take the time to check it out.

With the exception of a few backward states, gun rights are fairly solid across America. Unfortunately, California is one of the backward states when it comes to the 2A. If you are a voter in California, the blame rests squarely on you. We continue to elect terrible people, they continue to pass terrible laws, and we all pay the price. The only way to correct the situation is to elect good, honest people to office and the only way to do that is through an informed and engaged electorate. Your path is clear.

In the meantime, we are all safer with more armed citizens in our community. We now have that ability so I would suggest the following (paraphrased from the words of Michael Schwartz):

The right to self-defense is a basic human right. Gun ownership is an integral part of that right. If you want to keep your rights defend them by joining San Diego County Gun Owners (SDCGO), the Firearms Policy Coalition (FPC), Gun Owners of California (GOC), and Gun Owners of America (GOA). Join the fight and help us restore and preserve our second amendment rights. Together we will win.