The Latest Talking Point of the Left, Creating Fear Through Ignorance – Veterans As Domestic Terrorists 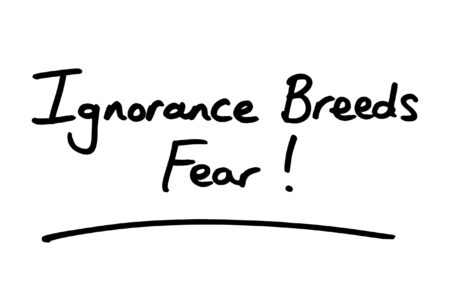 One of the latest talking points of the left is the threat of American veterans becoming domestic terrorists. This story from a left-leaning outlet (NPR) provides the basis for this latest attempt to use the disturbance at the U.S. Capitol to demonize all who disagree with the progressive agenda.

This tactic is nothing new for leftwing extremists who currently seem to have control of the Democratic Party. The tactic itself is simple; generate fear based on ignorance to more easily manipulate a targeted segment of the population. We see this approach successfully applied to a variety of issues.

The approach begins with the use of coordinated talking points. Watch the Sunday morning talk shows, a disgusting experience but worth doing once for educational purposes. You’ll notice many of the left leaning guests will tend to repeat the same talking points. You’ll see the same on media outlets like CNN, MSNBC, and NPR. The idea is for those targeted to hear the same position repeated by multiple people on multiple sources with the goal that after a while those in the targeted audience will accept the statements as fact. The technique is very effective.

The purpose is to create fear. Fear of groups such as conservatives, Christians, or Trump supporters. Fear of things, guns for instance. Fear of ideas; liberty, capitalism, and pride in one’s country for example.

Frightened people are much more susceptible to manipulation, restrictions, and loss of rights and liberty. Look no further than the mistreatment of citizens in California, New York, and New Jersey at the hands of their state governments under the guise of responding to the COVID-19 pandemic. Millions have been harmed due to outrageous government overreach fueled by fear. Next time you see someone driving by themselves and wearing a mask imagine what’s going through that person’s mind. Fear.

Gun control advocates have used this tactic from at least the time of the civil war and probably even farther back. May-issue laws originated as a way to keep newly freed slaves and other free blacks from arming themselves for self-protection. Fear of blacks attacking whites was used as a basis for these laws which continued throughout the American south well into the 1970s. Several backward states such as California and New Jersey use these laws to this day to keep their citizens disarmed and helpless.

All gun control is based on fear fueled by ignorance. In his book series, Good Gun, Bad Guy, author Dan Wos defines two categories of gun-control proponents. The first category he defines as Anti-2nd Amendment Radicals. These people are not interested in learning and intentionally mislead the second group with the goal of creating fear through ignorance in an effort to eventually disarm Americans by making the Second Amendment meaningless. This group is hopeless and not worth your time.

Wos defines the second group as Anti-Gunners. This group fears guns and believes guns are evil. These folks are driven by fear based on ignorance. They are not gun owners, probably do not have gun owners in their family or circle of friends, have likely never handled a gun, and know very little about them. The fear is nurtured over time by misinformation continuously provided by Anti-2nd Amendment Radicals and the media. This group is salvageable and very much worth your time.

Fear is driven by ignorance. Ignorance, and by extension fear, is defeated by knowledge. Engage Anti-Gunners, talk to them, answer their questions, invite them to the range and introduce them to our community. We are in the right and have the moral high ground, our ideas just need to be articulated effectively to those steeped in ignorance. The same is true in politics, fear driven by misinformation and ignorance will destroy our country. All Americans have an obligation to get involved and do their part. For those that want America to prosper, your path is clear.

Previous PostAm I A Nazi? Are You?
Next PostMinorities in the Gun Community