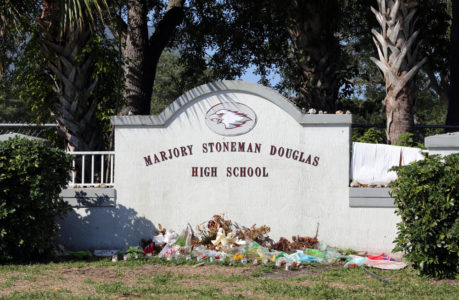 School shootings have become a regular event in our country. While not as common as some would have you think, these horrific events are tragic when they occur especially for those personally touched. School shootings are likely to continue for the foreseeable future.

These terrible events continue because the leaders in our country refuse to seriously address the causes. The left immediately politicizes each event into a push for more gun control. The media supports this approach and sensationalizes each event for profit. The right immediately goes on the defensive rather than engage and force a rational discussion. Neither side seriously addresses the issue. As citizens we allow our leaders to continue this behavior free of consequences. The result is the shootings continue.

Andrew Pollack decided this was unacceptable, he decided to do something. Andy lost his daughter Meadow on February 14th, 2018. Meadow was murdered along with 16 others at Marjory Stoneman Douglas High School (MSD) in Florida. Pollack decided to honor his daughter by finding out exactly why this happened and to do all he could to help prevent future shooting incidents in our nation’s schools.

Pollack’s story is documented in the book; Why Meadow Died – The People and Policies That Created the Parkland Shooter and Endanger America’s Students. While Pollack addresses the shooting itself, most of the book is focused on the education policies and existing environment of political correctness that combined to create the murderer. These policies, which have infected school districts across the nation, endanger millions of innocent students. They also prevent at risk students from getting the help they need. The MSD shooting was probably the most preventable shooting in American history.

Our children are the future and the current misguided policies in place in education are destroying that future. Obama/Holder era guidance from US DOJ and US Dept of Ed, promotes the same philosophy that is wreaking havoc in American cities such as San Francisco, Los Angeles, Baltimore, and Chicago. This philosophy is having the same effect in public schools across America.

If you are a parent, educator, or just a concerned American I implore you to read this book. Pass it along to your friends and if you know anyone that serves on a school board or works in education buy them a copy. The destructive policies described in the book exist because most Americans are unaware of them. The murderer that took seventeen lives at MSD is an extreme result of these policies. The more common result is children don’t leave school prepared for a successful future.

As gun owning Americans, we lose something every time one of these incidents occur. At the time of the Parkland shooting, a bill supporting national reciprocity for concealed carry had just passed in the House and was scheduled for consideration in the Senate. After the shooting, Republicans abandoned the effort (predictably) and the bill died. What could have been a significant gain for gun rights was lost due to an event that was completely unrelated to concealed carry.

Andrew Pollack suffered a terrible personal tragedy in the needless loss of his daughter. But out of that tragedy came the book and Pollack’s Americans for CLASS organization. Pollack’s organization fights for change in the hope that no other parent will ever have to suffer as he did.

Pollack took action. Pollack fought back. As gun owners we should each do the same. Contribute what you can, volunteer where you can, educate others when you can. The Second Amendment is as important to the future of America as the education of our children. Fight to protect it.

The right to self-defense is a basic human right. Gun ownership is an integral part of that right. If you want to keep your rights defend them by joining San Diego County Gun Owners (SDCGO), the Firearms Policy Coalition (FPC), Gun Owners of California (GOC), and Gun Owners of America (GOA). Join the fight and help us restore and preserve our second amendment rights. Together we will win.

Previous PostDoin Good Ain’t Got No End – New Gun Laws for California
Next PostGuest Post: An Update on Concealed Carry – San Diego County and Across America