Tyranny and the Second Amendment 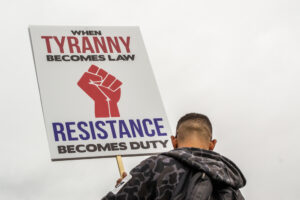 In America, our system of government is described as being by consent of the people. We elect representatives that in turn make the laws and we as a people agree to abide by those laws. We in effect consent to being governed by those we elect. But is it still consent if the people lose the ability to say no?

The Second Amendment represents the ultimate ability of the people to say no. If the Second Amendment is eliminated outright or made ineffective through various laws and regulations, do we still have government by consent or have we transitioned into something else?

Over the past two years we’ve seen how fragile our rights really are. We’ve seen basic rights trampled in the name of the pandemic. As with all dictators and tyrants the suspension of laws and basic rights began in the name of public safety. These steps are necessary to keep you safe.

In the early months of the pandemic one could argue that emergency actions were based on legitimate concerns for public safety as our leaders were acting out of fear. But soon that fear was replaced by the realization that emergency powers could be weaponized and used against political opponents.

Fast forward to today where politicians, drunk with power, refuse to give up their emergency powers. Where those who disagree with government policies are banned from social media, censored, and accused of spreading misinformation. Where parents who disagree with school board members are labeled domestic terrorists and are targeted by federal law enforcement.

In Canada the resistance to abuse has taken the form of the trucker’s protest. This has been a truly peaceful protest supported by a significant number of Canadian citizens. The Trudeau government reacted by invoking the Emergencies Act which gives the government sweeping authority including the ability to seize bank accounts of protestors and anyone they deem supportive of the truckers. Police response is growing increasingly violent. The truckers are so far holding firm.

It appears that America may soon have its own trucker’s convoy. How will the Biden administration react? According to Senator Rand Paul (R-Ky) laws currently exist allowing our government to take action similar to what was done in Canada. Not surprisingly a recent poll shows 66% of Democrat voters favored Trudeau’s crackdown. Republican voters disapprove of Trudeau’s actions by 87% to 8% while Independents disapprove 74% to 21%. 55% of the general voting public disapprove. The Left seems to crave authoritarian rule.

What does all this mean for Americans? It means that Trudeau style authoritarian crackdowns may be coming to a street near you very soon.

It will be interesting to see how our government handles our trucker convoy should it shut down the beltway as promised. Authorities were ok with mostly peaceful protestors shutting down highways during the BLM/Antifa riots of 2020/2021. They were also apparently ok with vandalism, arson, looting, assault, and murder. Will they be as tolerant with the trucker’s actual peaceful protests?

Our country has entered a dark period that’s getting darker by the day. If Americans want to turn this around, they need to do so at the ballot box, in November of this year and again in 2024. Democrat voters need to regain control of their party by electing men and women that care about the welfare of the country and the people. Republican voters need to rid their party of swamp Republicans and replace them with men and women that stand for what the party claims to believe in.

It’s only government by consent if the governed have the ability to say no. The Second Amendment is the people’s nuclear option. May that button never be pushed.

Previous PostThe ATF and National Gun Registration – We’re from the government and we’re here to help
Next PostWhere Have All the Real Journalists Gone?