Is this the End of Guns and Ammo In California? 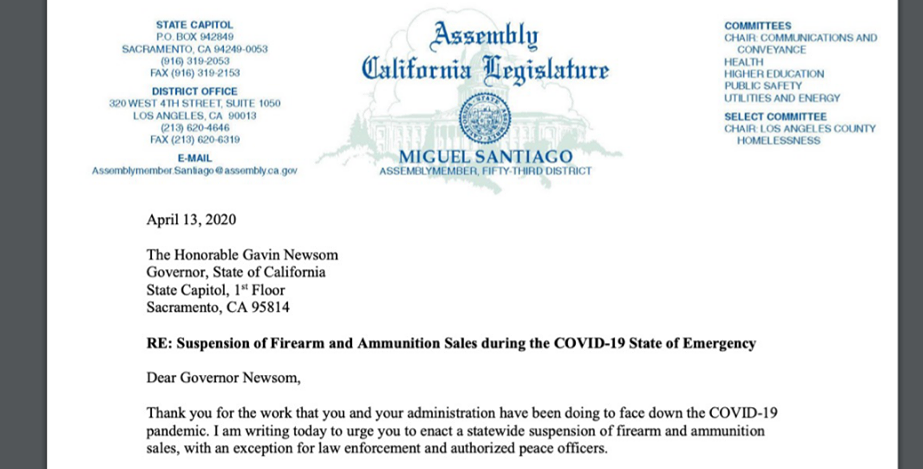 Is this the End of Guns and Ammo In California?

Assemblymember Miguel Santiago sent a letter to Governor Gavin Newsom this week that would annihilate the Second Amendment in California. In the interest of “public safety,” the public would no longer be able to buy, sell, or trade guns and ammunition, in spite of the fact that the public has shown they have an overwhelming desire for the need to protect themselves and their families during this crisis. Headlines like the early release of jail and prison inmates, the closing of Los Angeles county gun stores by Sheriff Villanueva, and officers being sent home under quarantine because of symptoms are the real reasons for the spike in sales. People do not have confidence that the Government will be able to protect them during this crisis. Like other anti-gun legislators in our state, Santiago proposes to  ‘solve a problem’ for their constituents they don’t want or need. The public has already clearly demonstrated that buying guns and ammo is the best way for them to protect their families.

CRPA and FPC are leading the charge to extinguish this maelstrom, but if we fail to examine the root cause and take steps to correct it, we will be faced with Santiago’s leftist approach to failed legislation, more legislation. If you’re ok with all this so far, make your calls and send your letters, then you don’t need to read any further. If you are truly alarmed at what’s happening, let’s look at Santiago to discover where he came from and how he got in a position to propose this most egregious assault on our Second Amendment rights.

Like many other state politicians, Assemblyman Miguel Santiago started his political career serving as a Board Member for the Los Angeles Community College District. From there, in 2014, he ran for California State Assembly for the 53rd District and won with only 20,472 votes out of a district with 465,246 people.

In the Primary last month, with only 11,010 votes out of a population approaching half a million, he advanced to the General Election again as the top candidate with 66% of the vote. https://ballotpedia.org/Miguel_Santiago_(California) In all of his elections, there was not even a Republican candidate entered in the race.

Why do these numbers matter? First, far fewer people vote in local/state elections than are registered or eligible to do so. Whether this is due to apathy or demoralization is another subject, but the numbers don’t lie. Second, the last two elections show such similar numbers as to demonstrate that his base was consistently voting for him, without any real change or effort on his part. A determined opponent or campaign manager could easily start to build support against the measures and legislation he backed..

His record shows that none of us should be surprised when Santiago chooses a time of national emergency to perpetuate his personal anti-gun agenda. In Firearm Policy Coalition’s 2A grading system, Santiago was given an F- in 2016, primarily due to his record to that point. Last year alone, Santiago backed each and every major anti-gun effort, including AB12 (GVRO), AB1135 (AW BB Restrictions), AB1674 (Firearm Purchasing Restriction), AB1669 (Increase Firearm Purchasing Fees) and every other Firearm-related restriction since his initial election that we could find. He endeavored to criminalize and price out every aspect of lawful civilian firearm ownership, while simultaneously trying to make criminals out of law-abiding gun owners throughout his career.

Not surprisingly, Santiago uses DOJ’s report of the Armed and Prohibited Persons System (APPS) to make his claim that there are 22,424 firearms in the hands of prohibited people. The APPS program was established in 2006, and the only clear result from their report last year was the $70 Million spent on the program since 2013 has been totally ineffective at removing firearms from the hands of prohibited persons. Last year, APPS agents seized a total of 1246 firearms from the APPS list at a cost of $8 Million.

The report states that there are 2,516,836 known firearm owners in California and only 22,424 firearms in the hands of suspected prohibited persons. Even if you assume that each firearm owner only has one gun, the report documents that 99.2% of California gun owners are law-abiding citizens while only .8% are suspected of being prohibited.

Santiago alleges that adding more guns to an emergency situation will increase hate crime, violent crime, and risk to children. The real statistics show that adding more gun sales will actually increase the numbers of law abiding citizens at a rate three times greater than those suspect of being prohibited.

At a time when his political efforts should be helping his constituents with real problems like the skyrocketing homelessness crisis in his District, Santiago is advocating to Governor Newsom for an unlawful and unprecedented suspension of the Second Amendment in California In a time of crisis, he is pushing to further criminalize and demonize our civil rights as gun owners, as well as making non gun owners more vulnerable in an emergency environment that is fraught with real fears.

The most important reflection is that his career could have been ended by local advocacy in 2014. The same was true in 2016, 2018, and especially in the 2020 Primary. Legislators like Santiago illustrate precisely how important local and district elections are in securing and defending the rights that are guaranteed in the Bill of Rights. Instead, he is now in a position of power, authority, and high-level influence.

On Wednesday April 15th, Governor Newsom addressed Santiago’s letter during a news conference. His response remains consistent with his statement on March 25th deferring to each county’s Sheriffs to determine local gun shop closures. Luckily for the 4 PACs, we’ve dodged the proverbial bullet (no pun intended). However, this attempted unconstitutional overreach by another gun-grabbing politician is precisely why local elections matter, and carefully vetting and selecting your local representatives matters.

We can’t simply go on our way and assume that politicians will not interfere with our lives if we simply keep our heads down. Join us. Orange County Gun Owners, San Diego Gun Owners, San Bernardino County Gun Owners, and Riverside County Gun Owners represent our members in interviewing, vetting, endorsing, and supporting qualified and capable Second Amendment candidates and incumbents. Join us and be part of an organization actively working each and every day to help preserve our rights.

[1]https://justfacts.votesmart.org/candidate/key-votes/151853/miguel-santiago/37/guns (Seriously, read through all the bills he has voted on, sponsored, or co-authored)