You Do Make a Difference – California’s Standard Capacity Magazine Ban 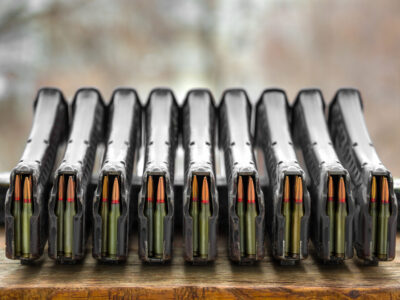 Activism comes in many forms. The point being to find something about which you are passionate and get involved in support of that something. At San Diego County Gun Owners (SDCGO) our passion is the Second Amendment (2A) and all things that come with it.

Primarily SDCGO is focused on helping elect 2A supportive politicians throughout San Diego County along with organizing and educating the general gun owning community. Sometimes we swim outside our lane and occasionally that pays off. Such was the case regarding the California Large Capacity (actually standard capacity) Magazine ban.

In California, it has been illegal to manufacture, import, take possession of, sell, or lend what the state defines as large capacity magazines (LCM) since 2000. It has been illegal to purchase or receive them since 2013. LCMs are defined by the state as magazines that hold more than ten rounds. Normal Americans and people throughout the world refer to these as standard capacity magazines.

The ban was challenged in court and in March of 2019, US District Judge Roger T. Benitez ruled the ban to be unconstitutional and an injunction enjoined enforcement of the ban. The state appealed and the injunction was stayed pending resolution of the appeal. The result was “Freedom Week”, a one week period last year when millions of standard capacity magazines were legally purchased by Californians.

Fast forward to September 2020. A three judge panel of the 9th circuit court, in a two to one vote, upheld Judge Benitez’s ruling that the ban was unconstitutional. As part of this legal effort, SDCGO joined a number of other 2A groups to submit a brief of amici curiae, a friend of the court brief, intended to help the court better understand the question and hopefully arrive at the correct ruling. The question addressed by the brief was: Does the confiscation of arms that are in common use by law-abiding citizens violate the Second Amendment?

The argument set forth in the brief, which can be read here, was made so well that it was almost certainly a factor in helping the judges come to a favorable ruling. So much so that the three judge panel used wording from the brief in the opinion explaining their ruling. In particular the argument that LCMs are not dangerous and unusual, a portion of the brief contributed by SDCGO, was actually addressed by the judges in their opinion.

What the ruling means to California gun owners is that for the time being nothing has changed. The state has appealed for an En Banc hearing where a larger group of judges will review the ruling of the three judge panel. No one knows how the En Banc panel will eventually rule but the argument is very strong for ruling the ban unconstitutional.

Many have asked what an amicus brief really does or how do we decide to file an amicus brief.  Filing an amicus brief is something SDCGO takes seriously because it is much more than a simple assertion or opinion.  Each word in the brief matters because it can influence a judge or judges assigned to the lawsuit.  Judges are only experts in making judgements on the law and they are asked to weigh in on a wide variety of subjects.  They rely heavily on experts to help them form their opinion and then craft their opinion in writing.  A badly written amicus brief can result in a badly written decision.  We are proud that our well written and thoroughly researched brief had such an impact on the final written decision.

Activism is important and we can all make a difference. All of us who support and contribute to SDCGO are primarily responsible for San Diegans regaining their concealed carry rights. If the 9th circuit eventually rules favorably and overturns the magazine ban we can reasonably argue that SDCGO made a significant contribution to that result. Reading the brief, and I highly suggest that you do, it’s hard to see how any rational person could not agree with the argument set forth. That’s activism.