“The Gun That Won The West” – Everyone Should Own a Lever Gun, They’re Just Too Much Fun! 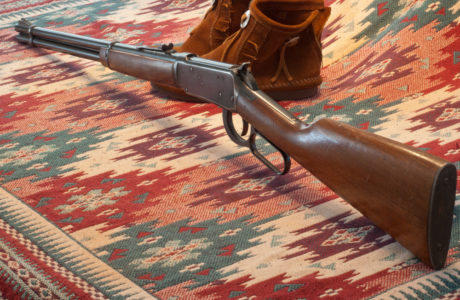 Since rediscovering firearms a few years ago, I’m continually amazed at how much fun I’m having with each new thing I try out. When I bought my first handgun (Glock 34) and started going to the range I thought, “wow, this is really cool”.

Once I was comfortable shooting at the range, I discovered USPSA shooting and began shooting matches on Saturdays. What a challenging and enjoyable way to learn to shoot and develop skills. “Nothing could be more fun than this,” I thought.

Then I discovered sporting clays. I unpacked my old shotgun, an Ithaca Model 37 Featherlight 12 gauge pump. This was the shotgun I used hunting rabbits as a teenager and it had been packed away for over 40 years. I broke it out, had a gunsmith check it, and have been using it to shoot sporting clays at the Lemon Grove Rod and Gun Club (LGRGC) ever since. Could the shooting experience possibly get any better?

The answer came to me in the form of my first lever gun. I’ve always been a fan of westerns, having been raised on the classics (Rio Bravo and El Dorado) the idea of owning a lever gun seemed very natural. In addition, several neighbors told me how much they enjoyed shooting their rifles.

After some research I decided on a replica 1873 Winchester from Uberti. It shouldn’t be surprising that I ended up with a replica of “the gun that won the west” although I did resist getting the “John Wayne loop” on the lever, at least for now.

The original 1873 rifles were chambered in pistol calibers, .44-40 and .45 Colt. The thinking was that most people regularly carried a rifle and pistol and this approach eliminated the need to carry two different kinds of ammunition. Uberti offers the 1873 Winchester replica in .44-40, .44 Mag, .45 Colt, and .357 Mag. I ordered my rifle chambered in .357 Mag.

I shot my new rifle for the first time last week at the LGRGC range and it was as much fun as everyone said it would be. I shot both .357 Mag and .38 Spl rounds. The recoil was minimal with the .357 Mag rounds and almost non-existent with the .38 Spl.

I was hitting steel targets at 100 yards pretty regularly. The LGRGC range also has clays set up on a berm at 100 yards. This is handy as you can see where your shots hit on the berm. I was pleasantly surprised to actually hit some of the clays, all this using the iron buckhorn sights on the rifle.

Working the lever to properly eject shells and load the next round took a little getting used to, but went really well once I got the hang of it. As always, others at the range, some shooting their own lever guns, were very helpful to the “rookie”. I’m always impressed by how friendly and helpful gun people are, whether at USPSA matches or just at the range, I always experience great people.

If you don’t have a lever gun in your collection I highly recommend you consider adding one. I’m looking forward to many more enjoyable hours learning how to shoot “the gun that won the west”.

If you want to keep your rights defend them by joining San Diego County Gun Owners (SDCGO), the California Rifle and Pistol Association (CRPA), and the National Rifle Association (NRA). Join the fight and help us restore and preserve our second amendment rights. Together we will win.

Previous PostIs Your Local Gun Shop Helping or Hurting the Cause?
Next PostIs it Legal to Carry in California State Parks?