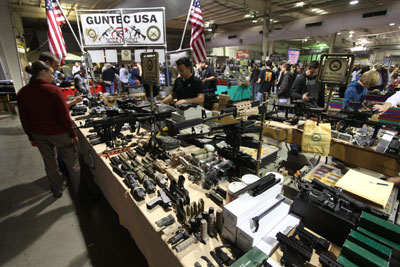 We have seen a lot of discussion and passionate complaints about the upcoming Crossroads of the West Gun Show this weekend in Costa Mesa. The simple fact that we are able to have the gun show at all is a huge victory, especially in light of past and current state efforts to stop gun shows throughout California. The complaints have ranged from a shortage of guns and ammunition (with long lines) in favor of other gun-related products and memorabilia, to issues with the 3-day format and correspondingly higher prices. However, we suggest a different perspective.

This is our first Gun Show in over a year. 2A vendors and others are traveling substantial distances and local vendors are taking time and paying employees outside of their regular schedule to have a presence at this event. Going to the Gun Show is the simplest and cheapest way to contribute as a Second Amendment Activist. The more people at this event, especially if they all make small purchases, the more we can support the idea that this is a vital effort and market within the 2A community and in legislative/judicial debates. We can support firearm businesses while demonstrating to Costa Mesa AND Crossroads of the West that this is a critical event worth having as frequently as they do! We constantly complain that the anti-gun lobby organizes better than we do, and that they are frustratingly effective at pressuring businesses and organizations out of existence- but here is a critical opportunity to show that we will not be pushed around, sidelined, or minimized. When we go to an event like this and support this particular 2A market however we can, we are demonstrating our commitment to our own community, rather than undermining it.

The Gun Show attracts the widest and most diverse customer base out of any gun store, range, or other local business. People go who don’t own firearms, who have no idea of the various legal challenges that are already present in CA for firearm owners. There are people who go to the Gun Show simply to get the piping hot pretzels, and this is a chance for us to talk to them about the Second Amendment and why it matters in today’s society. We know that our rights are under attack from all sides- why would we miss an opportunity to grow our own community and support the people, organizations, and businesses that we will desperately need in the coming years? We know that the Show may not have the guns and ammunition in the quantities we would like to purchase, but that is a NATIONWIDE issue, not a local one. The pricing may be high, but this is a similar issue of supply and demand, not an issue with our local vendors or Crossroads.

So we would ask you- if you want to support the Second Amendment, if you want to grow the 2A community, if you want businesses and companies in Orange County to see that the gun community matters- go to the Gun Show this weekend. Buy a ticket, buy something, anything, at the show, and help make it a profitable demonstration of our commitment to the Second Amendment. Show anyone who is watching that the firearm community is a force to be reckoned with, that our dollars and our votes matter more than any anti-gunner would like!