Flee California to a Free State – A Good Plan? 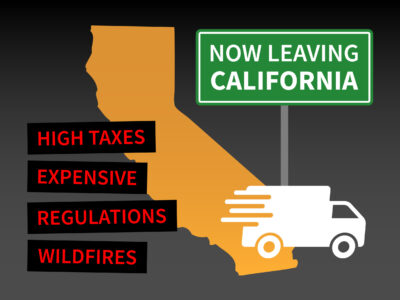 California is one of the most beautiful states in the country and those of us living here should feel blessed with our good fortune. Notice I said should. California unfortunately is cursed with one of the worst governments in America. The current government policies are unsustainable, and the state is gradually being destroyed. For a good summary of the situation, we need look no further than that flagship of leftwing propaganda, The New York Times. The article written by a left leaning journalist paints a convincing picture of what a poor model California is for the rest of the country. Steven Hayward of PowerLine analyzes and links to the Times article here.

So, what can a Californian do? Some have chosen to flee California for one of the “free states”. In fact, 130,000 more people left California than moved into the state last year. But is fleeing the state a good choice? Let’s take a look at Texas which many would consider one of the most prominent of the free states.

Texas has always been considered one of the freest of the free states but bad ideas from California spread to the other states like a cancer. Rep Sheila Jackson-Lee (D-TX) for example has introduced H.R. 127 in Congress, a bill that, if passed, would significantly infringe upon gun-rights in America and create the foundation for eventual confiscation. You can read more about H.R. 127 here.

Remember failed Senate candidate / failed Presidential candidate Beto “Hell Yes We’re Going to Take Your Guns” O’Rourke? Beto is now considering a run for Governor in Texas. Texas has the same problem as California in that large numbers of leftist voters congregate in the cities which could conceivably produce enough votes to elect O’Rourke. Failing that they could always stop counting ballots for a few hours in the middle of the night and wake up to Governor O’Rourke in the morning.

The wonderfully talented actor Mathew McConaughey has also expressed an interest in running for Governor in Texas. McConaughey was quoted saying gun-owners would have to take one for the team in accepting more infringement on their rights. McConaughey is a great actor but not a great thinker.

Texas is just one example, but we can find similar cause for alarm in Oregon, Washington, and Arizona. Remember those were once considered great states for gun-owners but each is now showing signs of Californication. SDCGO Executive Director Michael Schwartz often states that there is no point to running. The terrible ideas that start in California spread to the other states so that no matter where you go, you’ll still end up fighting for your freedom. You might as well stay here and fight to stop these bad ideas before they spread.